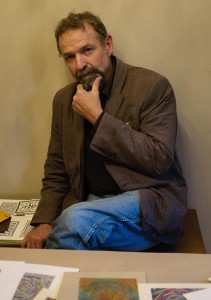 Jim Sherraden has been an active and popular printmaker since 1980 and his work is collected by individuals and institutions worldwide. His art has toured with the Smithsonian and has been shown at the John F. Kennedy Center for the Performing Arts, as well as multiple venues both in the United States and abroad. He is also an award winning author and lyricist.

Since 1984 Sherraden’s name has been synonymous with Hatch Show Print, the iconic letterpress poster and design shop in Nashville, Tennessee. For his work at Hatch, Sherraden was a recipient of the 2013 Distinguished Artist Award for the state of Tennessee, is the American Advertising Nashville 2013 Silver Medalist, and was awarded the Krider Prize for Creativity by the UCDA in the fall of 2014.